We have a small box of keys that we store on the top shelf of our den closet and I took it down so that I could put an old car key in it for storage. I put the key in, closed the box and placed it back up on the top shelf of the closet. A few minutes later I heard a strange sound that I could not identify and within seconds the box fell to the ground and spilled all the keys around on the floor. I got up and put the keys back in the box, went to put the box back up on the shelf and found that the reason the box fell was because I had put it on a slippery plastic bag that sat at a bit of an angle. I took the plastic bag down and discovered that it was full of old photographs that I had not seen in many years but that I had set aside because they were special and unique. As I sorted through them, there were three that were from 1953 when our family was getting its start in La Jolla as I described in my first post and coincidentally, the photos in my first post were taken the same day as these newly discovered photos. Those family photos from my November post were of the four of us (me, my mom, dad and sister JJ), but these new photographs were taken of the La Jolla Cove Beach and show the beauty and pristine majesty of the Cove in the early 1950s. The thing that really stood out in these photographs were the color and clarity at a time when color prints were uncommon. I believe my father shot these photos with Kodachrome slide film that were then converted to prints. My father had just returned from North Korea, where he served in the Navy, and while stationed there, he bought a 35-millimeter single lens reflex camera that was made in Asia and was very affordable. After he loaded it up with the slide film, dad took the family down to the beach for a sunny picnic at Ellen Browning Scripps Park and La Jolla Cove beach.

The photo that got my attention was this photo below that shows the Cove Beach looking South.

Only a few swimmers appear brave enough to navigate the waters, there were no seals or birds visible, and the fence on the bluff had not yet been built. But the most salient feature is how the ”Alligator Head” arch juts out from the bluff with a person or two sitting (picnicking?) right over the arch. The lighting in the photo highlights the appearance of the alligator head with the arch taking on the appearance of the neck of  the alligator. So that was 1953 and 25 years later the history books tell us that a winter storm in 1978 caused the collapse of the Ark. The second photo shows how this feature appears today as we approach 2020 and the effect of 41 years of wave erosion has taken its toll.

The third photo is a wider angle shot taken slightly left of the original with the beach being slightly more populated, and the Bridge Club appears on the bluff to the left. The rocks in the foreground have no bird droppings so you can be sure the pungent conditions of today’s Cove were non-existent back then too. 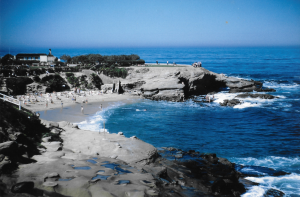 In reflecting on how I came across these photos, I couldn’t help but think that mom and dad, who are both deceased, somehow pushed that box of keys off the shelf so I would find that bag of old photos to share with our readers just a couple of weeks after sharing the family shots taken that same day in 1953. Maybe the beauty of the La Jolla scenery touched them 66 years ago in a way that inspired a celestial intervention here in 2019…just in time for TourFreely’s launch.

La Jolla is home to many memorable landmarks and expansive breath-taking vistas and our customers believe our GPS based audio tour is one of the best things to do in La Jolla because it is where you can “follow your passion, not a tour guide”. As of now, only the downtown tour of the La Jolla Village is available but we have plans to add tours for the Barber Tract to Bird Rock and La Jolla Shores to UCSD and other San Diego locations. You can download the app on your phone and take the hour long walk by clicking on the VoiceMap link.